Lessons in Every Adventure 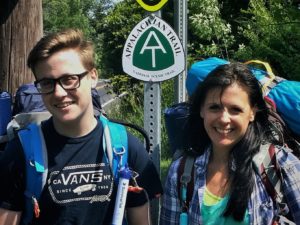 This is what I thrive on. Not in the adrenaline seeking way, but rather in newness, exploration, and discovery. I have been told it is a trait of being a Sagittarius, but I think it has more to do with my connection to the world around me. All of my children have a piece of this trait as well, especially our youngest who is now a senior in high school. (How did that happen?? – seems I just brought him home from the hospital!! ) Having passed this stage with the other three children, I know all too well that this is our last summer where we are still the center of his universe. On a whim I suggested one day that he and I take a few days to hike a section of the Appalachian Trail this summer – to my surprise he lit up in the way many young children do when they are asked if they would like to go to Disney World. So with minimal planning and zero backpacking experience we set out for a 66 mile adventure!

Day one was ROUGH!! You probably could have predicted that from the statement of no prior experience, right? On this day it was 90 degrees outside and we had our toughest climbs planned. In our “planning” we thought this would be smart to do the most difficult section with fresh legs. We quickly realized that no matter how lightly you pack, hiking with a backpack is much more difficult than the hikes we are accustomed to! I started to hear “I can’t do this” come from my son (echoing the sentiment in my own mind). It brought forth the years of report cards stating “Doesn’t work to potential”, “inconsistent effort”….. so I responded “You are stronger than you think – you will be surprised by what you are capable of when you continue to put one foot in front of the other.” Classroom learning environments have never worked well for him – like me, he thrives when he is connecting with the natural world around him and given time and space to reflect and meditate. 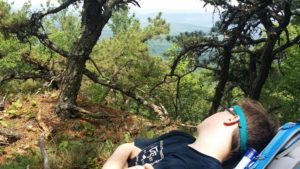 While he works hard to stay afloat in that structured space, it is foreign to him – uncomfortable, frustrating, and an uphill battle. Much like the battle we were currently facing.  Running low on water, my own legs were screaming as we pushed forward to find the next stream. We have been blessed with some beautiful weather this summer, but the side effect of which was dried up river beds for miles. With our water supply running out and only four miles into our adventure when we came across our first set of Through Hikers, two middle age men who showed no signs of fatigue. They saw defeat in our eyes and offered us encouragement and told us we were close to a wonderful gift of water, Gatorade, and fruit that some kind soul had set up for hikers to help themselves. It was humbling to hear how far they had come and yet have them still take pity on us after just completing a few miles. This quickly rekindled our spirits and motivated us to push forward to this magical place. Those two miles seemed like an eternity. We were just about to give up the search thinking the kind person had packed up and gone home when we saw another through hiker grinning from ear to ear with a bounce in his step. He excitedly told us that the magical gifts were just ahead and showed us the Gatorade that he had taken for later – it was like we were all children on Christmas morning! 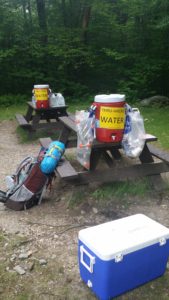 I can not remember a time in my life that I was so happy to see water. At the moment that we came to the gifts from a stranger, the sky opened and water showered down on us from above as well – a gift from Mother Nature herself as if to praise our strength for pushing through. As we refilled our water supplies and re-hydrated our bodies, more through hikers appeared with exclamations of gratitude for the thoughtfully placed water. Something so simple, yet necessary for life, it struck me how different the world would be if it operated more like this – a sharing of resources without the need of recognition but rather just to spread kindness. We decided to sit for awhile and prepare dinner with the others as we listened to the incredible stories they shared about their experiences over the past four months. I was embarrassed and ashamed to share with them that this was our first day and we had only traveled six miles. We were so visibly exhausted – mentally and physically and yet they had been dong this since the beginning of March and were still strong. Those feelings of inadequacy were quickly tossed aside as hikers shared their recollections of their first week – the mental games they had to play in order to not give up and the physical obstacles their bodies encountered. They assured us that tomorrow would be better, to stick with it and enjoy the journey. One young man in particular – Greyhound was his trail name – shared with us why he set out to do this. He was never an athlete, nor was he particularly outdoorsy. He was a good student, worked hard to get into a good college. Then graduated at the top of his class to get a good job. Got the good job and started working with the intent of buying a house, getting married, and starting a family of his own; “you know, everything you are supposed to do and want.” He went on to explain that one day “something just snapped. I couldn’t face being trapped into wasting one more day inside an office doing things to make someone money. For what? I realized life is short and I needed to actually live it.  Money no longer held the same value to me and I began to question what it was that I had worked so hard for all these years. I think I just did everything because I was told that is what you do and how success is defined.” He had an idea that he wanted to quit his job and hike the Appalachian. I am sure his mother thought he lost his mind and is filled with worry over his decision. But I can say as we got to know each other over our meals in the drizzling rain, I couldn’t help but admire his loyalty to his inner voice at a young age. We sat and listened as Greyhound shared stories of the profound goodness he has witnessed the past four months, how once a person is stripped from excess of our lifestyle, the strength of the human spirit emerges. He shared stories of hope in humanity at a time when the stories of horror overshadow the light cast by hope for so many. As our tired bodies fell into a deep sleep that first night, our souls were a bit lighter having shared a meal and stories of hope, strength, and the beauty of every life. 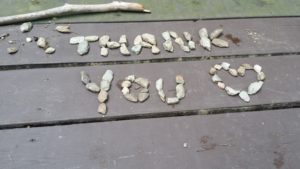 The next couple days were full of a new energy – this was no longer about having a fun hike as an escape from day to day life but rather a journey of the human spirit. Although our second day was spent making up lost ground, covering 22 miles of very difficult terrain, we enjoyed every moment. At our highest peak that day we discovered blueberry an 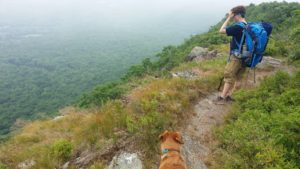 d raspberry bushes going a bit beyond the trail. We began to gather as many as we could into an empty bag and sat inviting weary through hikers to come sit and enjoy some berries with us as we took in the view. Sometimes we would share stories, other times we sat in silence. The sweetness of the berries provided  a little extra energy to weary travelers, while the company lifted tired spirits. I watched as my son went from being the youngest child that everyone takes care of to a young man that takes care of others – foraging for food, rationing water, setting up camp, starting a fire, and navigating in the world around him. 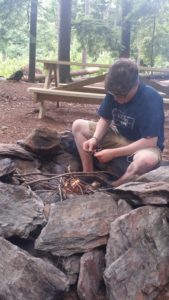 As our adventure came to a close I was left with so many lessons learned along that trail. I will forever be grateful for that time with my son, it occurred to me that being the youngest child, we have never had time alone like that – how special indeed. I have always known that he is kind, funny, compassionate, and strong with an inner wisdom far beyond what they teach in school. I have struggled all these years with our decision to nurture his strengths and not force him to conform to society. Don’t get me wrong, we encourage him to always give 100%  – “Anything worth doing is worth doing well” is commonly said in our home. But this trip re-affirmed what I already knew deep inside – that we were all put here with very special and specific strengths that collectively make the world a better place. When we ignore that inner voice, it leads to a life of unhappiness and a void in the world that we were intended to fill. My son may not be good at memorizing facts and spitting them back on a test, but if those teachers were to ask him his insight into the human spirit I bet he would have an answer so profound, that the teachers may learn something from him. We can all learn something from each other – we all hold unique talents, perspectives, and experiences, and like I always say there is no place better to do that than at a table sharing a meal! (Or on top of a mountain with some foraged berries) 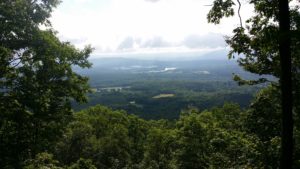